Only six teams took part in the Year 5 & 6 English Schools FA Girls only Football Festival at Priestley College last week. Due to the small number of teams a league format was used with each team playing each other to decide who would progress to the ESFA County Finals in January 2017.

On a cool October afternoon we observed some exciting girls football, brilliant goals and some very determined defending. This resulted in football games that were highly competitive and score lines that were very close. Only one team remained unbeaten throughout the competition and this team went on to top the league. The most competitive game decided who would top the league and who would be relegated to second place and this resulted in Oakwood Avenue taking the top spot with Stockton Heath finishing in second place.

Fixtures and results of the competition can be found below. 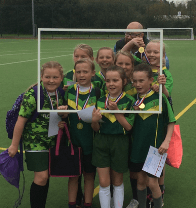 Congratulations to Oakwood Avenue Primary School who progress to the ESFA County Finals as the unbeaten winners of the competition with a total of 25 points. Stockton Heath Primary School also qualify in second place so will be representing Warrington in both the under 9’s and under 11’s Girls only competitions in January 2017.

Thank you to Priestley College for hosting the tournament and once again for supplying such great leaders to referee the competition.

Well done to the rest of the teams that competed and a special mention should go out to the loudest team of the day which was Broomfield’s with their chanting throughout the afternoon. Hopefully we’ll be seeing you all competing again very soon.